Monday 3rd June saw the start of Volunteers Week 2019, and so what better way to celebrate the contribution of our own volunteers on the ‘Trawling Through Time’ project than with a specially chartered trip on the pleasure cruiser (and local icon) the ‘Yorkshire Belle’ !

‘Why the Yorkshire Belle?’, you may ask.  Well, it was one of the 1317 vessels built by Cook, Welton & Gemmell at Grovehill, Beverley.  Launched in 1947, it is now the only one that remains in active service, fulfilling the purpose for which it was constructed.  It‘s also been operating out of the same port (Bridlington) ever since its construction; something which is rightly a source of great pride to skipper Peter Richardson, who has owned the ‘Belle’ for longer than any of its previous owners (36 years).

As we approach the final stages of what has been a thoroughly enjoyable and engaging community heritage project, sponsored of course by The National Lottery Heritage Fund, it seemed that a reward was in order for the hard-working volunteers who have successfully produced accessible digital versions of 170 ships plans, and listed over 1825 technical drawings that will soon appear in the archive catalogue.  A good deal of thanks was also due to a number of colleagues who have assisted the project in various ways and allowed us to deliver on our project outcomes.

…the fact that we had so much space on board meant that it was possible to move around and explore the ship more freely.” 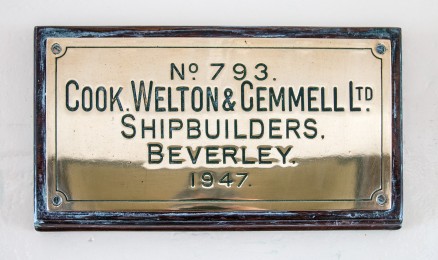 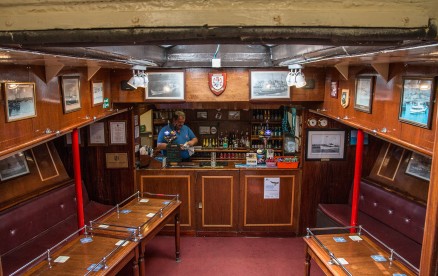 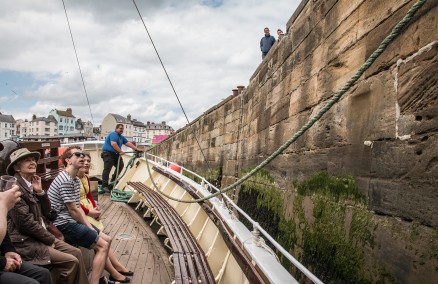 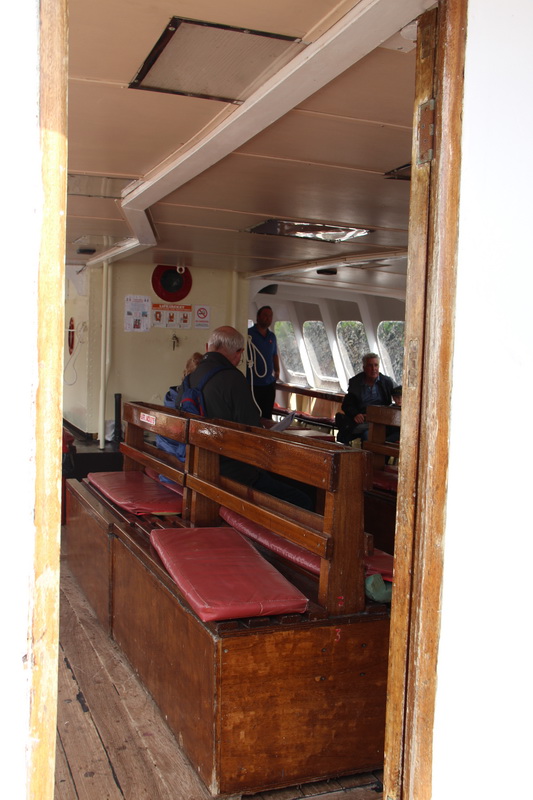 So it was that we embarked on our ‘voyage’; a group of 42 volunteers, staff, and our tv documentary production team, on a 1 hour complimentary round trip from Bridlington Harbour to Flamborough Head at 1pm on a fine Monday afternoon.  It was a fair size group, but taking into account that the Yorkshire Belle’s capacity is 200 passengers, it meant that we were travelling light, and this might have contributed to what became at times quite a choppy ride.  The consensus seems to be that this made for a better experience, and the fact that we had so much space on board meant that it was possible to move around and explore the ship more freely.

Some of the group chose to take up residence on the bow and adopt the mandatory ‘Kate Winslet in Titanic’ pose as we went headlong into the waves, with those behind bearing the brunt of a few broadside splashes that would out-do a log flume in a theme park!  Others chose to remain under cover and admire the view as skipper Peter gave us a guided tour of the Bridlington coastline, announcing that, with the forthcoming closure of Scarborough’s pleasure cruiser, a few miles further north, his will soon become the last operational pleasure vessel on the Yorkshire Coast.

After spending over a year working on technical drawings relating to the naval engineering of Cook, Welton & Gemmell, it was fitting to be able to give our volunteers the chance to experience sailing on the high seas in one of those vessels.  As with our trip to the Arctic Corsair, this enabled us to put that work into perspective and get an appreciation of the crafts which those technical drawings helped to create.

The sailing was even more special for two volunteers in particular; Barry Gibson’s grandfather worked on the construction of the Yorkshire Belle back in the 1940s, and his family connections with the Grovehill shipyard ranges from his father to great-grandfather, whilst Prue Blake is the daughter of Derrick Massey, former Director of Cook, Welton & Gemmell, who salvaged our archive plans from destruction when the company was wound up in 1963.

Overall, it was a much enjoyed and well-earned reward with the added bonus that, in spite of one or two passengers saying they felt a little queasy, there were no major cases of seasickness.  A great result!

With many thanks to skipper Peter Richardson and his excellent crew for taking care of us all (and for being so kind as to bring the ship back to its berth after we’d already set sail, to allow two of our party who’d been delayed, to join us on board!).

A number of images were taken on the day, some of which you can view on the slideshow above or view all  in our ‘Yorkshire Belle’ gallery.  With special thanks to volunteers Kris Dunham, Barry Gibson, and staff members ‘SydPix’, Ruth Leek, and Keeley Chambers for supplying the photographs.

2 thoughts on “Making a ‘Splash’ on The Yorkshire Belle”

View all posts by samuelbartle